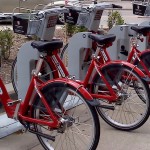 Cities across the country, from large (Chicago) to small (Spartanburg, SC) have implemented bike sharing programs over the last few years, but 2011 seems to be the year that these programs really took off.
Most urban bike-sharing programs have similar characteristics. They are intended to provide transportation for short trips, with the first 30-45 minutes free and additional charges for longer periods. Program operators are responsible for ensuring maintenance and storage for the bikes, and riders have fast and reliable access without the need to find or pay for a parking spot.
Ridership in most American cities has exceeded projections, notably in Boston where over 140,000 rides have been logged in just four months since the program’s inception. Denver’s program has seen a doubling of trips in 2011 using the same system size as the previous year.  Madison, WI has had 17,940 trips since the program opened in May this year. All of these programs plan significant expansions next year.
Although the programs have proved quite popular, funding is still and issue. Programs in the US need to cobble together a mix of membership usage fees, station sponsorship, and corporate sponsorship along with public funding. With federal funding for alternative transportation options drying up in tough economic times, bike share programs are finding it more difficult to identify and capitalize on sustainable revenue streams.  However, cities and bike-sharing companies are eager to find new funding streams as the programs become increasingly popular as part of residential, employment and retail developments.
Chicago Mayor Rahm Emmanuel also sees bike-sharing as a complement to the transit system, allowing people to travel the “last mile” to and from transit stops by bike. Many cities that have bike-sharing have found that members use the bikes to move around the center of the city after arriving via other modes.
Bike sharing programs continue to be implemented across the country with programs planned for Broward County, FL; Portland, OR; the San Francisco Bay Area; and New York City. Although many people still do not understand the concept of bike sharing, more and more cities are finding it the missing piece in their transportation system.