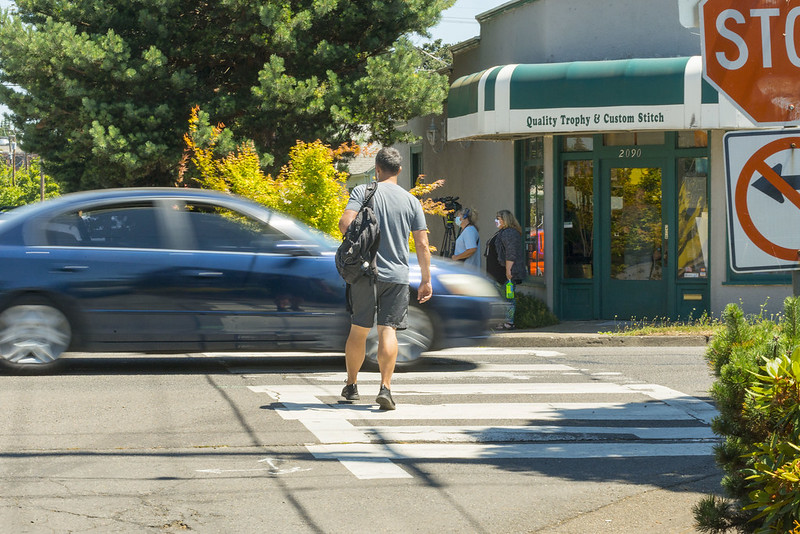 Pedestrian deaths hovered around 6,000 in 2017, according to a new report from the Governor’s Highway Safety Association. That’s a slight drop from the previous year but still 45 percent higher than in 2009. Media reports have hyped a handful of theories to explain the recent uptick—namely, distracted cell phone use and marijuana legalization—but years of data from across the U.S. and abroad points to one clear trend. The more we design our communities mainly around the automobile, the more we drive, and the more dangerous roads become.

Yes, we’re probably distracted. As GHSA reports, cell phone ownership has more than doubled since 2010 and messaging has tripled. Data suggests that drivers use their cell phones 3.5 minutes out of every hour on the road. And yet it’s been nearly impossible to connect the dots between cell phone use and phone-related crashes.

In October, SSTI looked for a relationship between the amount of time people spend on their phones while driving (using data from Zendrive) and the number of fatal crashes per person, by state. There was virtually none.

In California, which imposed strict cell phone laws in 2017, the use of handheld devices dropped by 50 percent, yet distraction-related crashes dropped by only four percent.

There’s no doubt that Americans are distracted behind the wheel, but we might just be trading old distractions for new ones. Ending all forms of distracted driving—through regulation or vehicle autonomy—could make our roads much safer, but our focus on cell phones could be distracting us from other important issues.

Is marijuana the cause?

In Washington, DC, and seven other states that recently legalized recreational marijuana use, GHSA notes, the collective number of pedestrian deaths increased by 16.4 percent from the first half of 2016 to the first half of 2017. Among states that didn’t legalize recreational marijuana, pedestrian deaths dropped by 5.8 percent.

Richard Retting, a traffic engineer at Sam Schwartz Consulting and author of the GHSA report, called this a “marker for concern,” while outlets ranging from the New York Times to High Times ran provocative headlines linking marijuana to pedestrian deaths.

Understanding and managing the risks related to drug-impaired driving are ongoing challenges, but the recent two-year patterns don’t provide much of a marker.

DC, for example—which legalized recreational marijuana in 2015—experienced a 133-percent increase in pedestrian deaths in early 2017, but that’s based on half-year totals of seven, three, and seven over the last three years. That puts it at one of the lowest pedestrian death rates of any large city in the country, along with cities like San Francisco and Seattle (neither of which are known for their strict marijuana laws).

Ignoring DC’s exaggerated increase, we found no statistically significant difference between states that legalized marijuana and those that didn’t. Pot-friendly states (including DC) represent only six out of 24 cases where pedestrian deaths went up. Maine saw no change and Massachusetts saw a decrease.

As hard as we might search for new explanations, one pattern is constant. “Pedestrians are struck and killed by cars at the same intersections and along the same corridors over and over again,” writes Emiko Atherton, Director of the National Complete Streets Coalition. Research by the coalition, presented at TRB earlier this year, found that pedestrian deaths are much more likely in places with high-speed, automobile-oriented roads, compared to more compact, urban places with pedestrian friendly streets.

These patterns hold true for all road users. Richard Florida points out that the most dangerous states for driving are less urbanized and tend to have higher speed limits. People in those states also drive considerably more. SSTI observed that in 2016, moving from a state where the average per person drives 8,000 miles per year (e.g., Washington) to one where they drive 13,000 miles (e.g., North Dakota) translates to a doubling of the fatal crash rate.

This is an unfortunate fact of life in the U.S. Our safest years in recent history (2009 to 2014) followed a precipitous drop in VMT. As VMT began climbing again around 2015, traffic deaths also shot back up. For similar reasons, we’re falling behind our international peers in terms of road safety, according to researchers at the University of Connecticut.

Given all the evidence at hand, it seems safe to say that if distractions or marijuana are contributing to the nation’s rising number of pedestrian deaths—along with better understood factors like drunk or inexperienced driving—it’s largely because our high-speed roads and sprawling patterns are compounding the risks.