By Eric Sundquist and Michael Brenneis
At 8 p.m. on April 27, about two miles from SSTI Central in Madison, a car sped north at 102 mph along an urban boulevard, according to police. The driver lost control and careened onto the sidewalk, hitting two people out for a walk. The crash killed one pedestrian and severely injured the other.

The death is just one of some 40,000 traffic fatalities the United States is likely to see this year—a shocking and grisly statistic that has spiked in recent years despite Vision Zero and other safety aspirations of state and local transportation agencies.

SSTI has been interested in whether data now being provided to state DOTs in order to measure delay—the National Performance Management Research Data Set (NPMRDS)—might be applied to address speeding danger as well. The NPMRDS is a very large dataset of probe vehicle speeds across the National Highway System, broken down by roadway segment and five-minute periods.

The US DOT is buying the data from INRIX so that DOTs can comply with performance measure requirements around delay and reliability. But it has other potential uses for planning, design, and operations as well. One application we haven’t seen—and we’d like to hear from anyone doing it or interested in doing so—is for speed management.

The notion is simple: The data provide average speeds by time and place, which can pinpoint congestion and reliability issues. They also indicate areas with excessive traffic speed. And while federal performance measures focus on the former, it’s possible to imagine speed management measures as well.

The NPMRDS data in some ways are not ideally suited to tracking such a measure. For example, they give average speeds by time period, so they lack the full distribution of speeds that a traditional speed study provides. Probe vehicle data may not identify through-flowing traffic as well as a person with a radar gun. And even with a very large sample, there are times when no probe vehicles pass through particular segments.

Yet such issues can be addressed, in part by operationalizing measures to take them into account and/or applying some appropriate rules of thumb. And the data have important advantages, as they are free to DOTs and being employed right now for other purposes.

We wanted to see what the data would show in the area of the above-mentioned crash (Figure 1). Madison’s Midvale Boulevard consists of three northbound and three southbound segments, with a 30 mph speed limit. We looked at traffic speeds on those segments from 7 p.m. to 11 p.m., by five-minute bin, for the month of July 2017, ignoring null values (times when no probe vehicle was present).

Comparing the segments, average speeds exceeded the limit in 28 percent to 54 percent of the time bins. The segment where the crash occurred—the southern-most northbound segment—was the worst. And this makes intuitive sense. Drivers entering this segment mostly come from a trunk highway with limited stops, or a perpendicular freeway. Speeds on Midvale tended to decline as traffic moved north, away from the highway and freeway.

In that segment, five-minute average speeds ranged up to 50 mph. Applying a rule of thumb that says standard deviation for speed on arterials is 7 mph, we would expect about one in 50 vehicles to be traveling at 64 mph or higher during that period. The 102 mph crash may not be as extreme an outlier as it would seem. 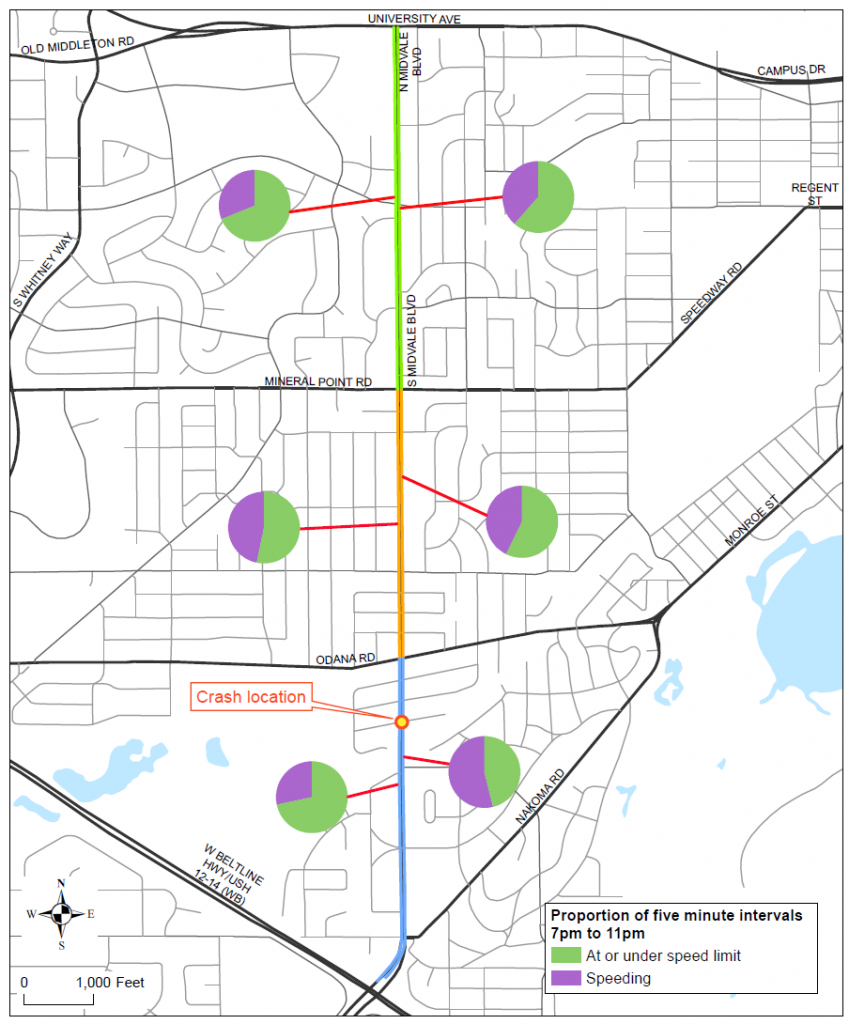 SSTI’s exercise was an extremely limited exploration of the NPMRDS data for speed management purposes. It may be just a coincidence that the highest incidence of speeding and the April 27 crash occurred in the same place. Yet it’s not hard to imagine developing a more rigorous approach using metrics like the one in Los Angeles and this data or a similar set to help bring design, operational, and law enforcement resources to bear on the nation’s scandalously high traffic death rate.

Are you interested in pursuing this idea? Please contact us.
Eric Sundquist is Director of SSTI. Michael Brenneis is an Associate Researcher at SSTI.