Certain cities in the U.S. are stereotypically considered “transit cities”—generally those in the Northeast, the West Coast, and Chicago. However, recent analysis from Transit Center indicates that many more urban Americans live within walking distance of transit than this conventional wisdom suggests, including in the Midwest and South. The problem isn’t transit access; it’s transit service quality.

Transit Center used the Center for Neighborhood Technology’s AllTransit tool to analyze 28 cities, including the 25 largest cities in the U.S. and three smaller cities with heavy-rail systems, Cleveland, Miami, and Atlanta. They found that in all 28 cities, the majority of residents live within walking distance of a rail or bus stop. According to the researchers, this is true even in Jacksonville, FL, which is larger than 27 sovereign countries at 875 square miles. In nearly half of the cities studied, more than 90 percent of people live within walking distance of transit.

The issue, as the researchers note, is that much of this service is far too infrequent to be reliable. The chart below depicts the provision of “high-quality” transit service across all 28 cities using AllTransit’s threshold, which requires that a bus or train line run at least 672 times per week, or every 15 minutes on average. By this definition, 13 of the 28 cities have no high-quality public transportation at all. 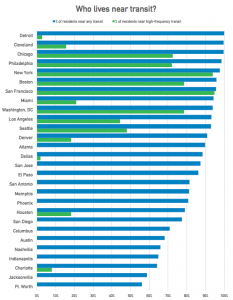 Interestingly, the data shows no clear link between the cities with the best overall transit coverage and those with high quality-transit. Both Detroit and Cleveland have almost universal transit coverage, but only have one high-frequency line. Atlanta offers nearly 90% transit access and has a relatively large subway system, but has zero high-quality transit by AllTransit’s definition because it doesn’t run enough late-night and weekend service.

Transit Center’s research also looked at comparisons across demographics. The researchers note that cities with fewer high-frequency transit lines tend to have a greater demographic skew among people who live near high-quality transit. Often (though not always), those neighborhoods have significantly smaller proportions of people of color.
Unfortunately, this poor quality transit service contributes to lower transit ridership, which in turn often gets cited as a reason not to invest more in transit. Underinvestment in transit is creating a negative feedback loop.

A Mobility Lab article responding to the study argues that, “shedding the idea that only some cities can be “transit cities” is important because this attitude has a direct effect on policy. While a robust transportation network will get used in any city, they don’t necessarily get built in every one. The belief that no one will use a bike network, bus system, or rail line can create a feedback loop where underinvestment leads to a self-fulfilling prophecy because riders are repelled by sub-par infrastructure, and those that remain are forgotten or ignored.”