Americans spent more than 10 hours per week traveling in the early 1990s—the highest amount in two decades—but that number has since dropped below 1975 levels to less than 8.5 hours, according to a new study published in Transportation Research Part A.

The resulting travel time peak, shown in Figure 1, mirrors a similar peak in average vehicle miles traveled (VMT) that occurred roughly a decade later. This earlier peak, however, suggests that important shifts in travel behavior were already underway well before the recession took hold around 2007. Demographic trends and changes in leisure-related travel are among the main reasons, but their effects have changed considerably over time. 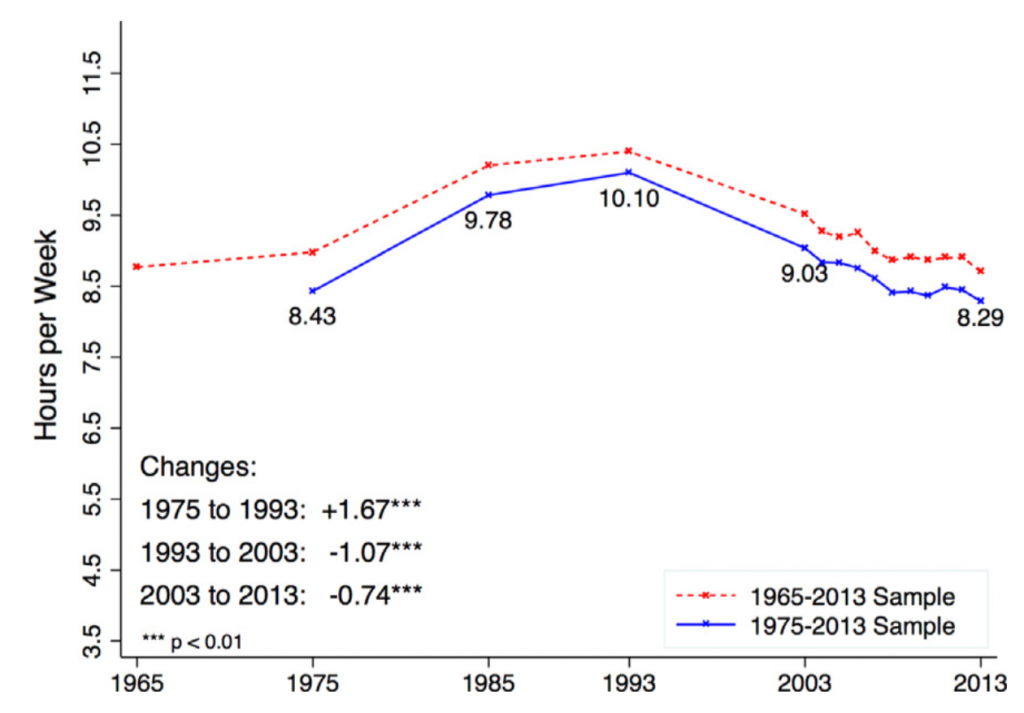 Using time use surveys from 1975 to 2013, the study identifies three kinds of activities: work, non-market work (i.e., errands), and leisure, including travel for each. From 1975 to 1993, average weekly travel time for all activities increased from 8.43 to 10.1 hours (+20%). The major causes, according to the study, are rising educational attainment levels, baby boomers reaching prime driving age, and more women entering the workforce. Declining gas prices in the latter part of the period also likely played a role.

In the following two decades, average weekly travel time dropped to 8.29 hours (-22%), but the causes are somewhat different. Those earlier trends that pushed travel times upward did begin to slow, but the decrease is due mostly to a shift from work and errand activities to more leisure activities—notably, things like computer or television use and sleeping, which are much less travel-intensive.

Once again, rising gas prices likely influenced this shift to some extent. Another plausible factor, however—only hinted at by the study’s authors—is that American cities were spreading out into more suburban areas during this time, encouraging a shift toward in-home leisure activities. The authors note that, rather than reducing congestion, massive highway construction from 1960 to 2000 likely motivated this sprawling growth pattern. The corresponding rise in VMT that continued through 2004, even as travel times began to drop, seems to support the theory.

The time use data from this study ends at 2013, after which per capita VMT began to rise again and, more recently, seems to have plateaued. Tracking recent changes in travel time more closely could give transportation agencies better perspective on how travel behaviors are currently shifting and which transportation investment strategies offer the most benefit.