There are 83,141 households in the city of Des Moines, and 1.6 million parking stalls. Even allowing that some of those 1.6 million stalls are occupied by commuters originating from outside the city, that’s a pretty staggering disparity (Figure 1). And even accounting for commuters, peak parking occupancy rates are only 65 percent downtown. 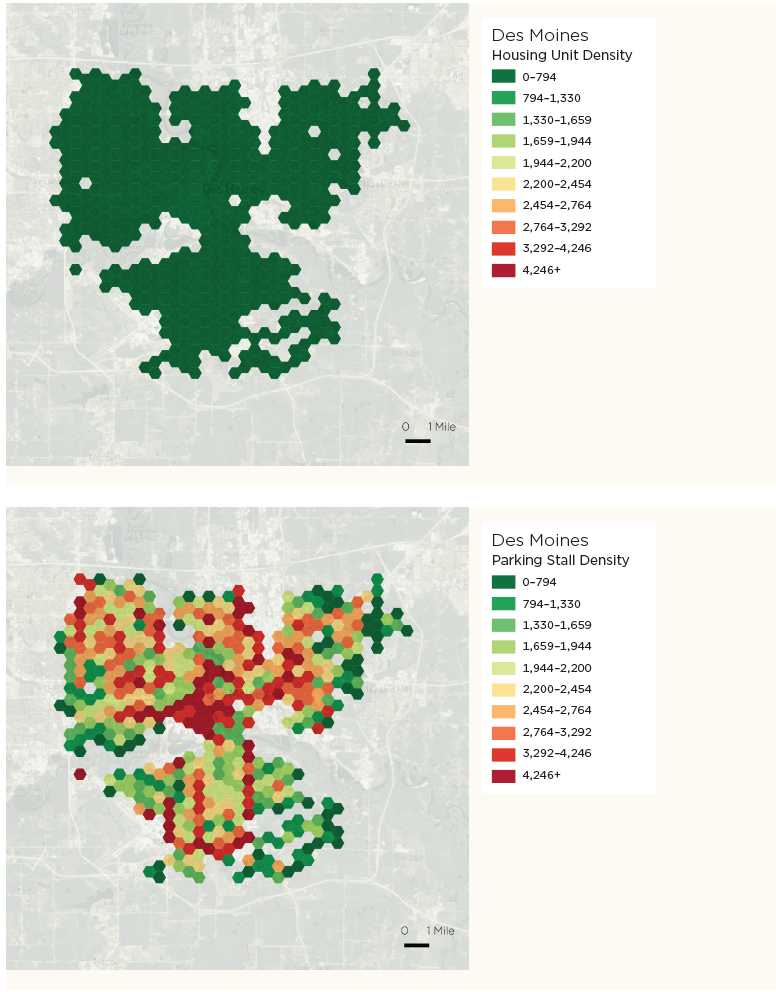 These are some of the eye-opening findings from a new Mortgage Bankers Association report on parking supply in American cities. The report argues that localities should do their own parking inventories rather than rely on rules of thumb for parking needs and risk squandering resources.

It does this persuasively by inventorying five disparate cities—Des Moines; Jackson, WY; Philadelphia; New York; and Seattle—and finding “lavish” amounts of excess capacity everywhere except New York. In Jackson, for example, parking stalls outnumber homes 27-to-1, even though more than half of the stalls in the residential and midtown areas sit empty, the report finds.

The cost of all the excess parking, again with the exception of New York, is “monumental” for the cities involved, the report argues. Public and private entities in Seattle, for example, have invested $118,000 per household, or $35.8 billion, in parking.

The report argues that this overspending on parking, to the detriment of housing and other needs, occurs in part because cities build and mandate parking blindly, with little idea how much is really needed:

The parking “problem” in cities has been misunderstood for years, partly because comprehensive parking inventories weren’t available. In Jackson, Wyoming, for example, the Town’s website boasts of the public parking garage that was built in 2008:
“A true success story for the downtown area and a homerun by our City Council. Mayor Mark Barron can be credited for his vision and hard work at finding a common sense solu­tion to a long-time Jackson problem… too little parking.” (“Town of Jackson Parking Garage Challenges to Success.”)
But was there really a shortage of parking in Jackson? Without an inventory it was difficult to put numbers to the question. The parking structure cost the town $17.4 million, and each of its 283 parking stalls are now provided free of charge. When a preconception of too little parking infects policymakers, more parking tends to get built and provided to everyone for free. But when housing is in short supply, as it is in Jackson, home prices go up. In Jackson, the median 2017 home sale price of $897,000 was out of reach for the median income household that made $70,517.

The report urges cities to inventory their parking to better know what’s needed. This may appear to be a daunting task, but it need not be. In this 2017 SSTI webinar, Chris McCahill describes a resource-light approach that worked in Madison, WI—and which showed levels of oversupply similar to that described in the Mortgage Bankers report.

Findings that cities are overparked and are overspending on parking aren’t new, though some of the examples in the Mortgage Bankers’ report are fairly jaw-dropping. Beyond the content, one noteworthy aspect of the report is its financial-sector authorship. Often when cities consider reduced parking requirements or parking maximums, developers push back that their financing partner insists on the higher level of parking. While this one report won’t solve that problem, it provides some useful ammunition, in a way that existing academic work may not.