The AAA Foundation reports that fatalities due to red light running is at a 10-year high, and more than half of the deaths were outside the offending car, including pedestrians, bicyclists, and those in other cars. In 2017, the last full year for which statistics are available, there were 28 percent more fatalities than in 2012.

What’s causing this spike is hard to pin down, but the increase in driving is one obvious correlation. As the economy has improved, there are more cars on the road. But red-light fatalities are growing faster than other types of fatal crashes. And drivers admit that they sometimes run red lights, with 1 in 3 saying they have done so within the last 30 days. 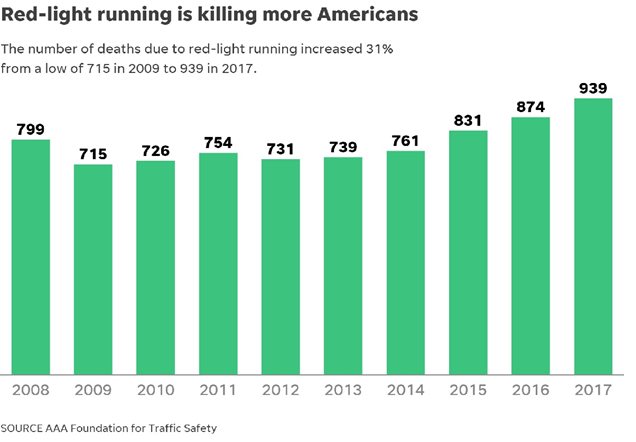 So what is the solution? The Insurance Institute for Highway Safety reports that properly-operated red light cameras can cut fatal crash rates. Well-publicized cameras deter violators because they increase the chances of getting caught. Roundabouts can also reduce the most serious types of crashes—head-on and T-bone collisions—and the crashes that do happen tend to be less serious. The AAA data show that states with red-light cameras experienced an 8 percent increase in red-light fatalities in the 2008-17 period, while those without saw a 38 percent increase.

Robbie Webber is a Senior Associate at SSTI.