A new study by SSTI and the Traffic Operations and Safety Lab at UW-Madison provides a partial roadmap to the future for transit in smaller cities. The study gave Eau Claire, Wisconsin—a city nearing 70,000 people—a look into emerging transit technologies and insight on their residents’ perspectives toward transit. SSTI also laid out a dozen future scenarios, evaluating each one using accessibility metrics.

Working with the city staff, Eau Claire Transit, and other local stakeholders, our team first mapped out two possible future transit lines, then evaluated how each one would improve access to jobs across the region. Our accessibility metrics, estimated using Citilabs’ Sugar Access, represent the total number of jobs reachable by transit or walking, with more weight given to closer jobs. The results showed trade-offs between adding new service to outlying areas (shown below) and bolstering downtown service with new circulators. 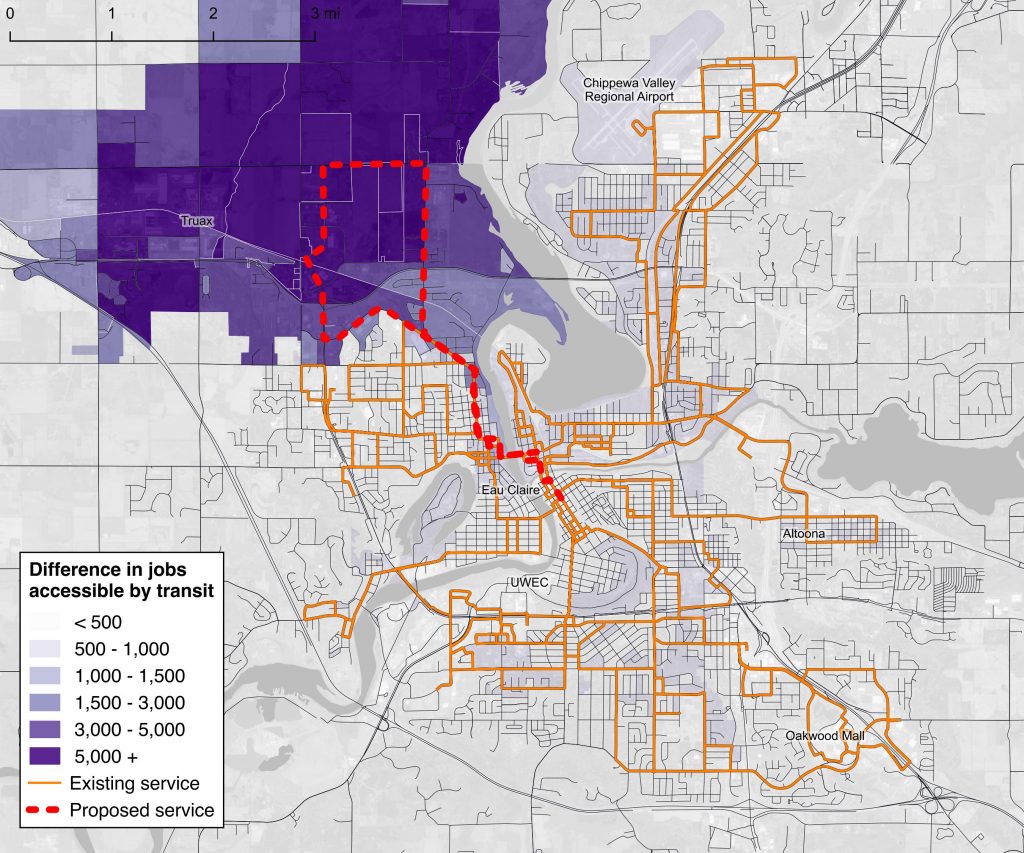 The greatest overall benefit, however, could be achieved through strategic growth near transit, according to our analysis. Under a dense infill scenario, for instance, the average resident could reach 16 percent more jobs in 2030 than if growth took place mainly around the city’s edges, and 6 percent more than under a random growth scenario. Paired with transit-oriented development, relatively small transit investments could increase the average resident’s access to jobs by nearly 22 percent over the next two decades.

We also surveyed Eau Claire residents and workers as part of the study to learn more about their attitudes toward transit and the possibility of self-driving transit vehicles. They generally welcome more transit improvements, even though relatively few respondents currently use the system, and they are open to new vehicle technologies, but lukewarm on fully driverless vehicles.

The information will inform the city’s new transit plan, which is now being updated.

Chris McCahill is the Deputy Director at SSTI.