Low-income and minority Americans face a dilemma: They are disproportionately victimized by our transportation system. And while law enforcement could help, those same Americans are subject to profiling and fines that can lead to economic ruin. 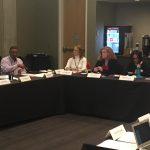 SSTI’s mid-November Community of Practice meeting, attended by CEOs and top staff from a dozen state DOTs, took on this problem. In order to keep the conversation candid, we generally do not report quotes from our meetings. But Jill Locantore, executive director of Walk Denver, gave us permission to share her presentation, and we can also summarize the thrust of the conversation.

One option would be to ratchet up enforcement, but that would not only affect motorists passing through these neighborhoods but also the residents themselves. Locantore presented statistics that showed both that traffic tickets can become potentially enormous financial burdens on low-income residents, and that black motorists are stopped and even searched at a greater rate than white motorists, even though searches of black drivers turn up less contraband.

Locantore and the group generally agreed that design fixes, e.g., to create more and safer pedestrian crossings and to manage traffic speeds, are better than additional enforcement. Yet even with an aggressive DOT design program, it will be a long time before all streets are improved, and even then, not all motorists will drive safely. Therefore, enforcement will always have a role.

Automated enforcement systems—red-light and speed cameras for safety, as well as possibly toll and vehicle occupancy monitors for traffic flow—offer a way to improve on current enforcement practices. Reviews of speed camera effectiveness, for example, have found substantial reductions in injuries and fatalities.

But this approach only works for low-income and minority residents if the systems are deployed with equity outcomes in mind.

Locantore criticized a Colorado law that mandates speed cameras be manually operated. The human element, both in choosing where to set up speed vans, as well as which vehicles to ticket, raises the possibility of profiling. The law also bans speed cameras on the most crash-prone parts of the network, so safety benefits are reduced.

Other materials on this topic, as well as other items discussed at the November meeting, are available on the SSTI website.

SSTI is beginning to plan its 2020 meeting. If your DOT isn’t already participating but would like to, please contact Director Eric Sundquist.

Eric Sundquist is Director of SSTI.