As reliant on traffic forecasts as transportation agencies are to plan and design road projects, those forecasts are rarely evaluated to see how well they held up after project implementation. A massive new study, outlined in a recent NCHRP report, fills that gap. It compares traffic forecasts from 1,291 projects that opened since 1970 to actual traffic counts. Only 10 percent of the projects opened before 2003.

The study found that 95 percent of forecasts were “accurate to within half a lane” and that forecast accuracy is generally improving. The average difference between forecasted traffic volumes and actual volumes is around 17 percent, but it was closer to 28 percent in the 1990s. Some of the best models today are off by only 14 percent on average, while some of the worst performing ones are around 32 percent.

Despite improving, however, many forecasts from travel demand models are still just marginally better than estimates from simple traffic count trends, which are off by 22 percent on average. The study calls out economic trends as particularly difficult to account for in models. Each percentage point increase in the unemployment rate during the year a road project opens, for instance, corresponds with a three percent decrease in traffic. An earlier NCHRP study showed the wide-ranging effects that other socioeconomic and technological trends could have on future travel demand.

The most accurate estimates, according to the study, tend to be on larger, high-volume roads and projected over relatively short time horizons. Given the variation, however, the study recommends that modelers systematically evaluate past projects to improve their methods and to be able to report uncertainty, as shown in the figure below depicting percentile ranges from past forecasts. 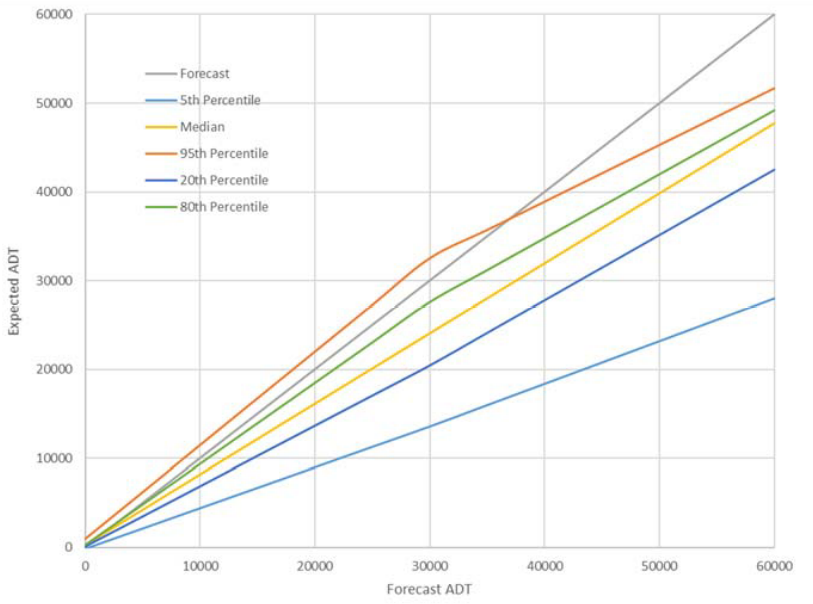 Evaluations can reveal issues like “optimism bias,” shown above. As USDOT indicated in its 2016 Condition and Performance report to Congress, project-level forecasts tend to overestimate travel demand. This newest study found that traffic counts are in fact six percent lower than forecasts, on average. In its most recent C&P report, released just last week, USDOT’s VMT forecasts are also around six percent lower than aggregated state-level estimates in 2034. Actual traffic volumes could be higher or even lower in the future depending on growth patterns, economic conditions, and the way new technologies shape transportation, but acknowledging these uncertainties can lead to more thoughtful investments and policies.