Since 2010, a new design for accommodating active transportation has been slowly growing in popularity in North America. The “advisory bike lane” (ABL) or “advisory shoulder” design, also known as “edge lane roads,” provides bike and/or pedestrian space on each side of the roadway. Unlike roads with standard bike lanes, ABLs direct motorists to a single lane in the center. When they need to pass an oncoming motorist, both move to the edge temporarily, occupying the bike lanes. 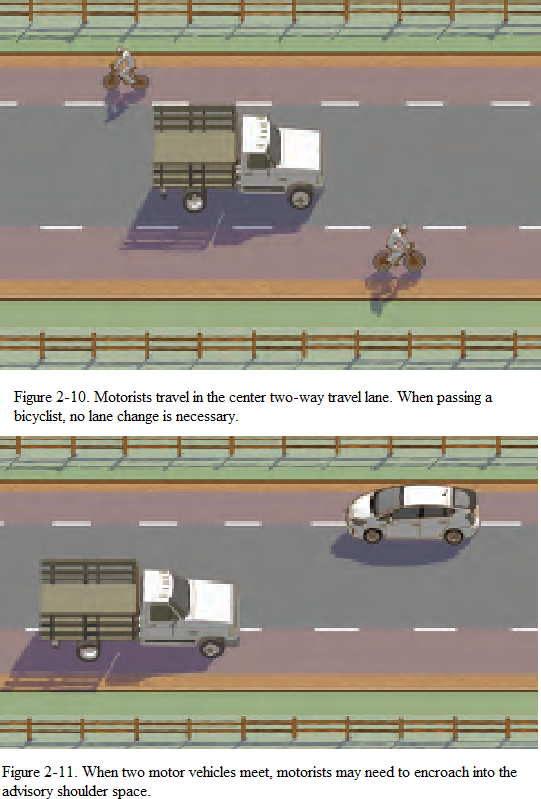 According to consultant Michael Williams, who writes in the December issue of ITE Journal, the treatment has been employed in at least 30 projects in North America, where it is also beginning to show up in design guides and recommendations, including the current draft of AASHTO’s Guide for the Development of Bicycle Facilities. It has been used for longer and on more roadways elsewhere in the world.

American applications to date have been on urban and suburban roadways with 6,000 or fewer AADT, generally on links less than a mile long, in order to provide key active transportation network connections. While safety, including concern over head-on auto collisions, has been the leading concern about ABLs, results from six projects with available data show that crashes and motorists speeds have stayed level or improved.

Williams suggests that with ABLs’ good safety record, the treatment has the potential for a wider range of applications. Because edge bike lanes can be wider than the standard five-foot bike lane, for example, ABLs could help bikes avoid “door zone” collisions with motorists in parking lanes. And it may be a useful design for some higher speed rural roads, where space for active transportation users is limited.