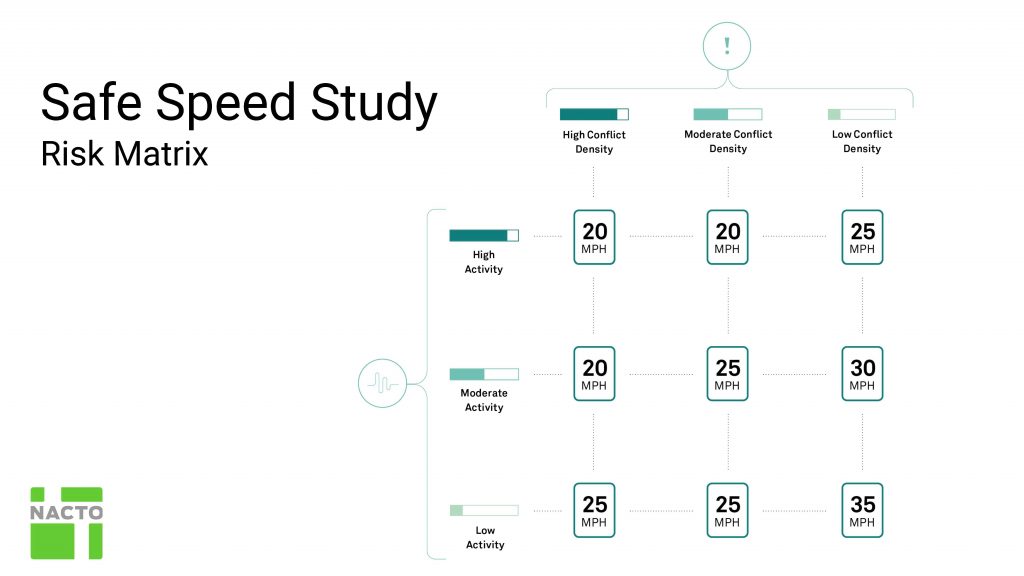 The 85th percentile rule in speed limit setting—an arbitrary but longstanding convention—has begun to weaken in recent years, with new guidance now allowing for lower speeds. FHWA’s USLIMITS2, for example, allows for speeds down to the 50th percentile in certain cases.

Such is the approach that NACTO will recommend in a forthcoming practitioners’ guide.  NACTO’s Jenny O’Connell previewed the guide at this month’s TRB annual meeting.

Rather than relying on the 15th-most dangerous driver (or even the 50th) out of 100 to set speeds, NACTO’s approach determines the safe speed by a street’s context across two dimensions:

The desire for such a new paradigm in speed-limit setting has been growing in recent years, partly driven by the spike in fatal crashes involving bicyclists and pedestrians. Reliance on driver behavior to gauge reasonable speeds has meant that when more drivers speed, speed limits must be raised, even in the face of concern for safety. Such an outcome in Los Angeles has helped prompt the state legislature to form a Zero Fatalities Task Force, which is due to release recommendations on speed limits soon.

The NACTO recommendation has its roots in a 2017 NTSB report, which highlighted many problems with the driver-behavior approach and recommended that a “safe system” approach, like the one NACTO will propose:

The safe system approach to speed limits differs from the traditional view that drivers choose reasonable and safe speeds. In the safe system approach, speed limits are set according to the likely crash types, the resulting impact forces, and the human body’s ability to withstand these forces (Forbes and others 2012). It allows for human errors (that is, accepting humans will make mistakes) and acknowledges that humans are physically vulnerable (that is, physical tolerance to impact is limited). Therefore, in this approach, speed limits are set to minimize death and serious injury as a consequence of a crash (Jurewicz and others 2014). This approach is far more commonly applied outside of the United States, such as in Sweden (where it is called Vision Zero), the Netherlands (where it is called Sustainable Safety), and several jurisdictions in Australia (OECD 2008). However, it is now gaining acceptance in the United States, particularly in Vision Zero cities and municipalities.

NTSB addressed federal regulation in the area, recommending that “FHWA [should] revise Section 2B.13 of the MUTCD to, at a minimum, incorporate the safe system approach for urban roads to strengthen protection for vulnerable road users.” NACTO’s guidance promises to help practitioners operationalize this approach.