Driving mileage in the United States climbed by just under 0.9 percent in 2019. On a per capita basis, the increase was just under 0.6 percent. The VMT figures come from FHWA’s latest Travel Volume Trends release.

The per capita figure is 2 percent below the peak historic driving rate, set in 2004. But the overall growth represents a continuing challenge to greenhouse gas reduction efforts, undercutting improvements from vehicle efficiency and electrification. 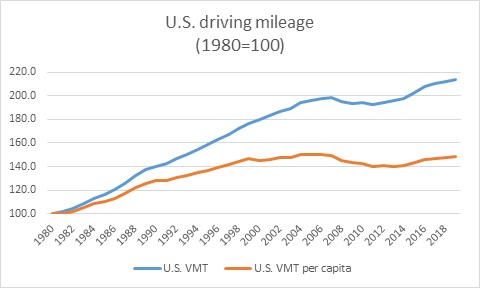 VMT is likely to decline in 2020 due to the combined effects of COVID-19 and a predicted  recession. Given the lower levels of traffic following several years of relatively moderate growth, federal, state, and local governments may do well in the near term to shift some highway support to transit, which is suffering a more acute crisis due to social distancing-driven ridership shocks.

Eric Sundquist is Director of SSTI.