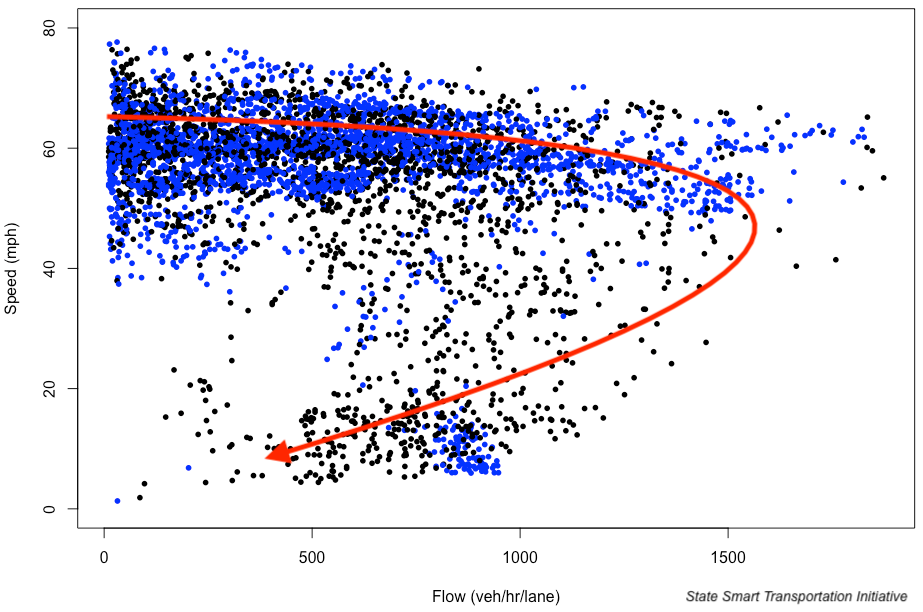 With overall traffic down due to the COVID-19 pandemic, one highway in Oregon is now moving higher traffic volumes at twice the typical speed, according to an analysis by Joe Cortright at City Observatory. This might seem counterintuitive, but it perfectly illustrates the benefits of managing traffic demand, based on simple traffic engineering principles.

In his recent post, Cortright looks specifically at data from I-5 in Portland. He found the northbound lanes moved 26,900 vehicles at 26 miles per hour during a typical weekday rush hour before the pandemic. More recently, however, they’re moving 27,500 (+2 percent) vehicles at 54 miles per hour.

In traffic flow theory, there are well-known relationships among vehicle speed (miles per hour), flow (vehicles per hour), and density (vehicles per mile). Figure 1 shows the relationships using hourly observations from individual traffic detectors along the same stretch of highway in Portland. Black dots represent the week of February 10, before the pandemic, and blue dots represent the week of April 13.

As we add more cars to the system, we move along the red line, starting at the top left. The traffic density gradually increases and the level of service (LOS) moves from A toward F. At first, the flow increases rapidly while the speed drops slightly from around 65 to 55 miles per hour. At that point, cars are still spaced out enough in each lane that they can achieve “optimum flow” (sometimes nearly 2,000 vehicles per hour). Then they hit what Cortright calls a “tipping point.” Anywhere beyond that point, adding more cars to the system leads to much lower speeds, which also means fewer cars can pass through each hour.

During the pandemic, I-5 often reaches optimum flow, but rarely passes the tipping point (the blue dots). In the past, it dipped into the congested range much more often (the black dots).

The following video from Washington State DOT, which Beth Osborne shared on Twitter, illustrates the point using rice and a funnel.

From the Portland data, we can also see the total daily northbound traffic on this stretch of I-5 is down by about 30 percent just south of downtown and by 15 percent at the city’s northern edge, which is often all it takes to ease congestion. In other words, limiting the number of vehicles entering the system at once—even by a small amount—can help move them through much faster.

Additional road capacity could provide some relief, but only in the unlikely case that induced traffic doesn’t soon reach the tipping point again. This is why transportation demand management can be so effective, as Cortright explains. It’s why afternoon traffic speeds on I-66 increased 19 percent when the Virginia DOT expanded the tolling period on its high-occupancy vehicle lanes. It’s also why transportation agencies can benefit from employer- and development-based TDM programs, which readers can learn more about in SSTI’s Modernizing Mitigation report.