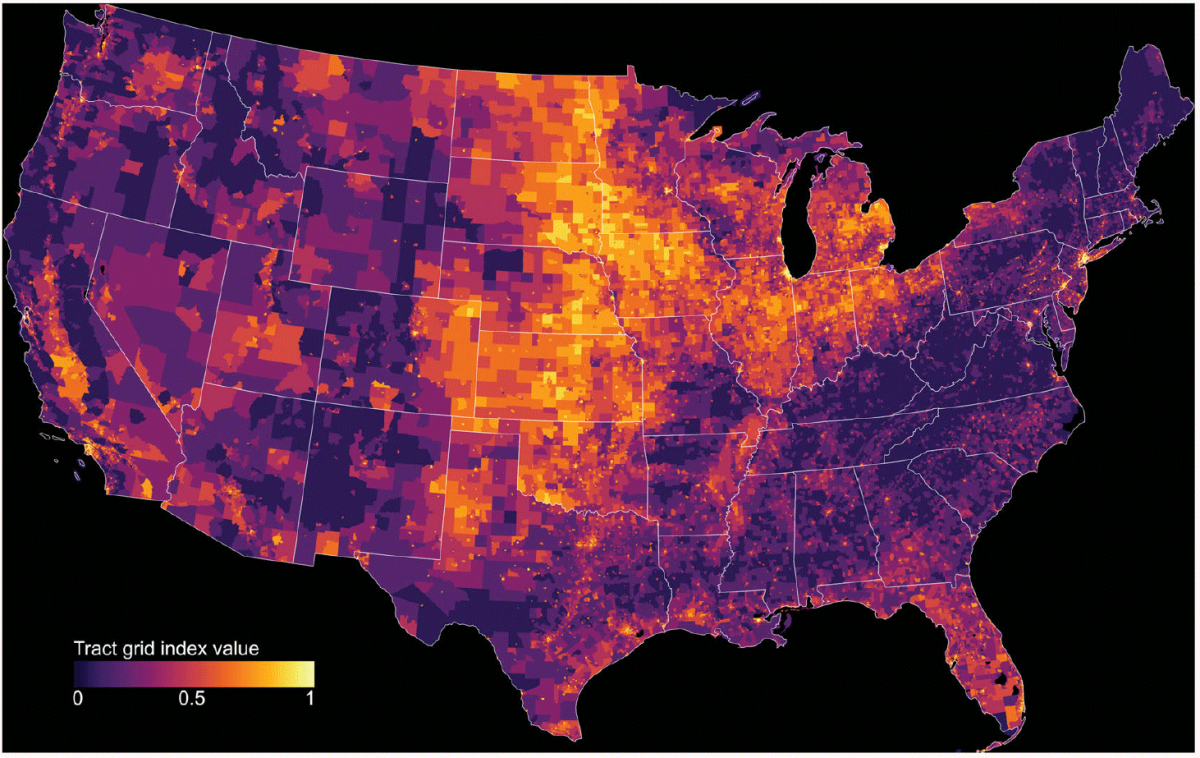 Orthogonal street grids began to decline after 1940 as “planners and engineers tried to accommodate shifting cultural preferences and mobility patterns” with a new sprawling, disconnected, automobile-oriented manner of development, says Geoff Boeing in the Journal of the American Planning Association. The accommodation of automobile mobility soon led to automobile dependence. Homes were separated from jobs and essential destinations—resulting in longer car trips, more emissions, and a crisis of diseases related to sedentary behavior. Boeing’s analysis further illustrates the trend that the streets of the U.S. are becoming more gridded since the 1990s, and that, as streets become more gridded, car ownership declines.

Loyal readers of the SSTI blog will recall that we’ve previously covered both the returning trend of orthogonal street grids since the 1990s, and the links between health and denser, gridded street networks.

This analysis uses publicly available data from OpenStreetMap and the Census Bureau American Community Survey to estimate the decade when a census tract’s roads were likely to have been built, and to calculate the grid index of the tract. The grid index combines straightness, the proportion of 4-way intersections, and orientation order—or internal consistency of street direction—to measure the “griddedness” of each census tract.

The map of the grid index across the continental U.S. shows the influence of topography, and whether development happened slowly and organically, or more rapidly after the widespread adoption of orthogonal planning instruments such as the Public Land Survey System. This is especially true in the north-central U.S. where both urban and rural tracts exhibit a high degree of griddedness. (Figure 1.) Regression modeling reveals that each decade after 1940 shows lower griddedness than pre-1940, even as the use of grids has rebounded since the 1990s.

Car ownership, and by proxy VMT, went up after 1940 as the various measures of sprawl went up, but has been dropping with the return of street grids post 1990 (Figure 2.) One model of urban census tracts shows a decrease of about 0.18 vehicles per household for each unit increase of the grid index.

Street networks, once developed, can lock areas into a particular morphology for decades, so decisions made now can have lasting repercussions. The author concludes:

This study’s findings can be read as something of a scorecard for the profession in the past 80 years by assessing the trajectory of street network planning and design. Privileging automobility over all other modes, 20th-century planners locked in generations of car dependence. But since the 1990s, planning scholars and prominent practitioners have called for better evidence-based practice to create more sustainable, healthy, and just cities. To successfully implement climate action plans or attenuate pervasive car dependence, practitioners must plan for denser, interconnected networks that allow for non-motorized travel and mass transit provision.

Photo Credit: Geoff Boeing, “Off the Grid…and Back Again?”