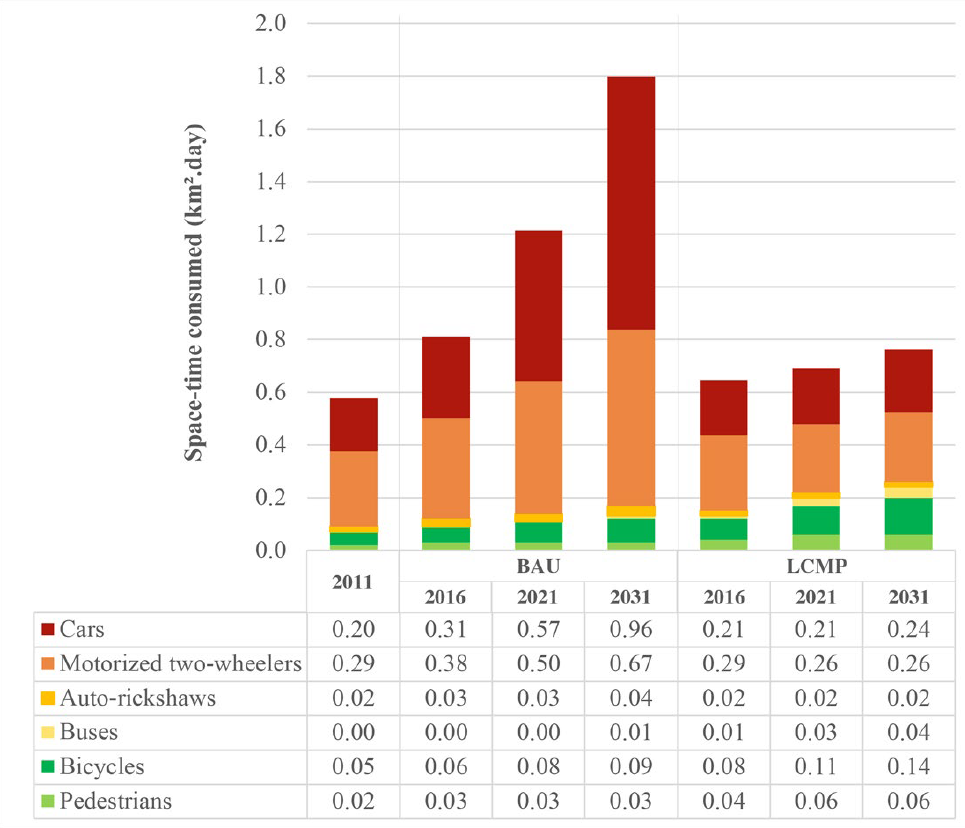 Infographics depicting the amount of space required to move a given number of people by different modes have been widely distributed. Generally, they show how out of proportion the space occupied by private cars is in comparison to the space apportioned to transit, walking, rolling, or biking. Car-oriented development has transformed the landscape, and the lives of those who dwell in it—and is widely considered unsustainable. The shift toward valuing the mobility of people over the movement of cars stands to reverse some of these trends. But in order to prepare for this future, planners and engineers need tools to quantify the space allocated to the various travel modes—both when they are moving and at rest. New research presented in the Journal of Transport and Land Use aims to fill this gap in the literature by quantifying space used by modes through time; a measure of the space-time occupied by vehicles.

Space-time refers to the area occupied by a vehicle multiplied by the time it occupies this space when moving or parked. The travel space-time value is a function of the number of vehicles on a road segment, the space used by each at a mean speed, and the time spent by each vehicle on the given road segment. Since the space a moving vehicle takes up over time depends on its speed, future work may want to use actual speeds, the authors suggest.

The space-time value of parking is a function of the number of vehicles parked at the origin or destination, the space each takes up, and the time they spend parked. The number of parked vehicles may be an underestimate in this study because the models only consider those used for daily travel.

This research focused on Rajkot, India, and compared current conditions with two future scenarios. The 2031 “business-as-usual” (BAU) scenario only expands road capacity for cars, based on traffic projections. The 2031 low-carbon option shifts modes away from private cars to transit, including bus rapid transit, and walking and bicycling. City space is at a premium in Rajkot, so reducing the land area devoted to transportation could free up land for denser, more walkable development, and offer an alternative to car-centric sprawl at the edges of the city.

Travel models in India must account for two-wheeled motor vehicles that can fit into all available space on the road, increasing its capacity. Parking is not necessarily confined to designated spaces, potentially leading to parking that is more closely packed than we find in the U.S.

According to the models, by neighborhood one-third to three-quarters of land area could be preserved from the expanding transportation system by adopting the low-carbon rather than the BAU scenario. According to the authors, “parking still accounts for most of the total space-time used by transport in both future scenarios”—driven up by private car ownership and use—but is much reduced in the low-carbon scenario due to reduced car use.