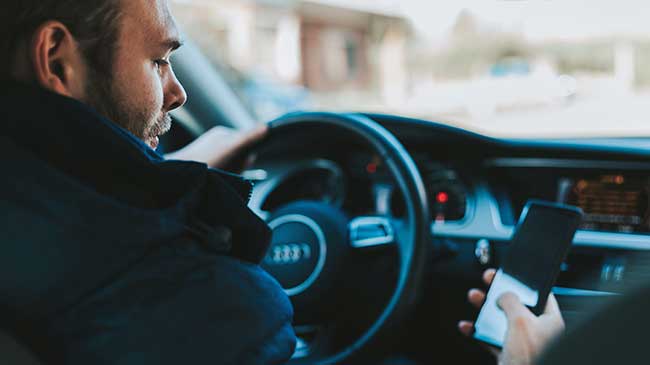 Media outlets and transportation professionals focused heavily on distracted driving in the past decade, sometimes linking the rise in pedestrian and cyclist deaths to growing cell phone use. While important to consider, this focus can potentially shift responsibility for traffic safety toward drivers and away from road designers. Important new research, however, shows that road design actually plays an important role in curbing the most dangerous consequences of distracted driving.

The study, published in Accident Analysis and Prevention by Ohio State researchers, looked at 1.74 million crashes in fifteen states between from 2013 to 2017. Unlike most studies, all of the crashes involved distracted driving. It found that among these crashes, severity often has to do with road design, the built environment, and speeding. For instance, it found that injuries are upwards of 40% more likely at intersections than at mid-block locations, but they are around half as likely at roundabouts. In other words, these modern design principles make driving safer even when drivers are not being diligent.

Two other related findings that jump out from the study are: 1) distracted driving crashes are much less severe in urban areas, and 2) they are much more severe when speeding is involved. In several states (Florida, North Carolina and North Dakota), urban crashes are at least 75% less likely to cause severe injuries. Because of this, the authors note, “more attention should be paid to both a more targeted driver’s education and stronger enforcement of distracted driving regulation in suburban and rural areas.” But it also suggests that certain urban design principles could be applied more broadly to curb the worst impacts of distracted driving. As past research has shown, these include attention to context and—not surprisingly—keeping speeds low.

And since lower speeds are so important, designers can help prevent many crashes, even without any influence over drivers’ behavior behind the wheel. In addition to making crashes less severe, slower speeds give drivers more time to observe their surroundings and react, even after they are momentarily distracted.