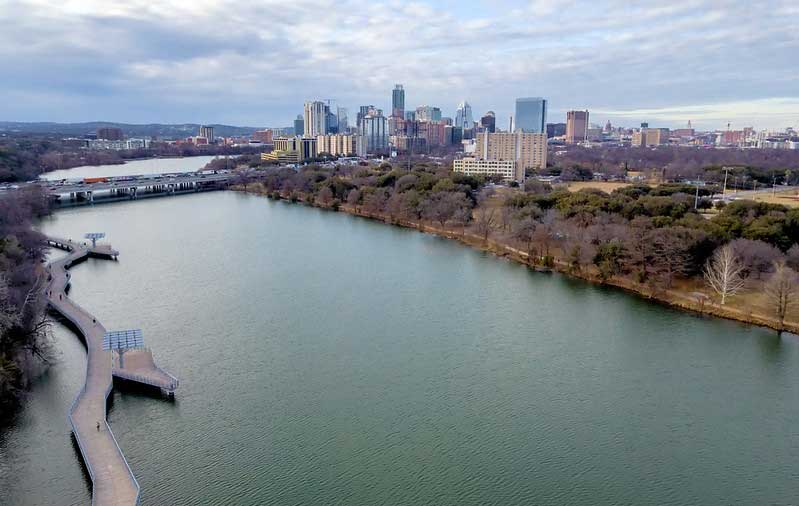 In 1962 the construction of Interstate Highway 35 solidified an existing racial and economic divide running through Austin, Texas. Today the communities on the east side of I-35 are still largely Black and Latino, and less economically advantaged than their mostly white counterparts to the west of the highway. Such exclusion has denied people of color the scale of asset accumulation enjoyed by generations of white people. Advocates are now raising concerns that the distribution of COVID-19 vaccine may follow historical patterns of inequity.

Groups such as the Austin Latino Coalition argue that while the Black and Latino residents east of I-35 are disproportionately affected by COVID-19, due to having lower incomes, working frontline jobs, and having less access to essential services, they’re not being prioritized to receive the vaccine. Locating the majority of vaccine providers to the west of I-35 (figure 1) represents a burden to the east-side residents who may rely on transit in this city—considered the most car-dependent in Texas.

In the late 1920’s, a planning instrument was introduced to racially divide Austin using East Avenue, later the route of I-35, as a boundary. Federal redlining policy beginning in the 1930’s further excluded Black and Latino communities. When it was designed and built, I-35 followed the standards and practices of the day—standards that are now being widely criticized and reexamined.

Renewed awareness of racial inequity has focused discussions on the harm caused by urban freeways that destroyed thriving Black communities, reduced the accessibility of neighborhoods to essential destinations, and hardened divides for decades to come. A recent twitter thread from Calvin Gladney soliciting examples of highways that “razed or divided a Black or brown neighborhood” received hundreds of replies. Former Transportation Secretary Anthony Foxx called attention to this issue in 2016 during his last months in office.

Some cities are advancing programs to remove urban freeways. The recently introduced Senate Bill S5065 includes 10 billion dollars to facilitate the removal of urban freeways from low-income neighborhoods or communities of color.

There is still hope for more equitable vaccine distribution in Austin, however. As Texas enters the 1B phase of vaccination, a new Public Health hub has opened to distribute 12,000 doses. While the exact location of the hub has not been publicized—the site is only equipped to handle shots by appointment—it is located in East Austin.