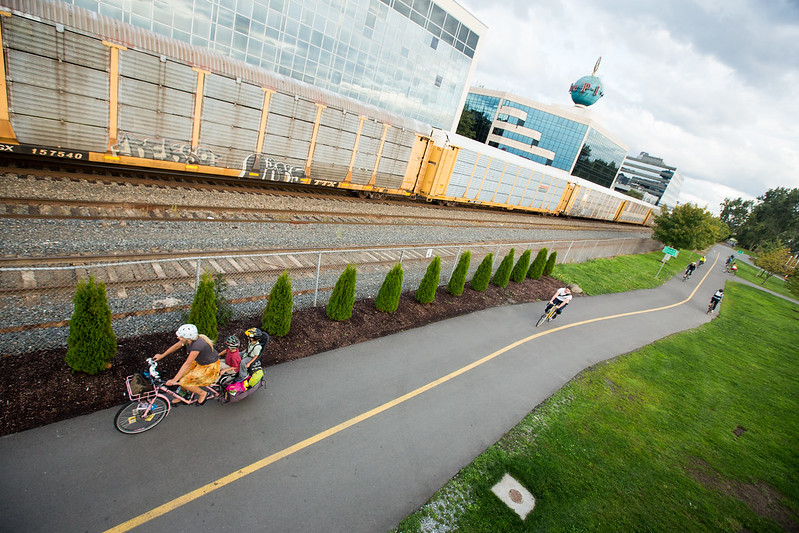 A significant increase in the cycling mode share (currently just 1.1 percent of trips in the U.S.) would offer a number of benefits—reduced emissions, positive health outcomes, and potential reduction in congestion—but it can be hard to envision how a large-scale increase in cycling could be achieved. A recent comprehensive analysis of cycling behavior based on travel surveys from 17 countries and published in Transport Reviews suggests the key to greater biking mode share might be providing a cycling environment targeted to meet the needs of female-identifying cyclists.

The study analyzed a combination of city, regional, and national travel surveys collected from 2009 through 2019, evaluating levels of cycling, trip purpose and distance, and gender and age demographics at the city level for 35 major cities (greater than 1 million population) and in urbanized areas nationwide for 11 of the 17 countries. The authors estimate that their study captures the cycling behavior of 648 million urban residents from all over the world, or about 17% of global urban population.

The researchers found a strong relationship between the level of cycling overall in a given region and the representation of women among cyclists and cycling trips. In almost all geographies with the highest levels of cycling mode overall (greater than 7%), female-identifying cyclists made as many cycle trips as men, and sometimes even more. By contrast, the share of female cyclists was much lower in geographies with cycling mode share below 7%, with females 50–60% less likely to cycle than males.

The authors note that this suggests the path toward greater mode share likely involves addressing gender inequalities in cycling. Previous research has indicated that ratios of male to female cyclists are greatest in areas that are less attractive for cycling, potentially due to higher risk tolerance among male riders. This study seems to support those findings: countries with the highest levels of overall cycling and female representation included Germany and the Netherlands, where women take a full 28.2% of their trips by cycling. The authors note that cities in these countries are places that encourage bicycle travel through protected cycle paths, secure bike parking, reduced traffic speeds in residential areas, and land use and transportation policies that support compact development and discourage car ownership.

Woman also travel more by bike for non-work purposes than men, and their cycling trips are typically shorter in length, potentially because women tend to do a disproportionate share of household labor and also tend to have greater caretaker responsibilities, making them more likely to “trip-chain” regardless of how they get around. Prioritizing safe routes for neighborhood errands, not just commute trips, could be a key strategy to achieve better cycling mode share. Japan, a third country topping the list of both overall cycling mode share and female representation, has less protected cycling infrastructure, but development patterns in a number of Japanese cities support shorter trips.

The study has other interesting findings: