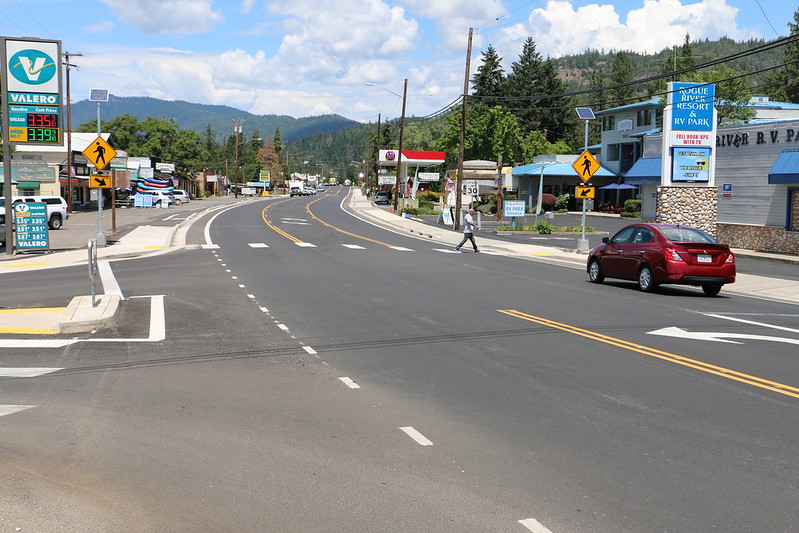 The Seattle DOT (SDOT), in seeking to improve pedestrian mobility, is installing marked crosswalks in areas with anticipated demand, which is an important shift away from the conventional warrant-based system. The final form that these installations take—paint alone, or paint with enhancements such as medians or flashing beacons—will depend on the location, and ultimately still be a matter of engineering judgment and available funding.

In Seattle, as elsewhere, traditional engineering practice has relied on warrants—conditions that must be met—to justify the placement of a crossing. Seen in the new light of equity, safety, and environmental concern, the system of warrants is decreasingly compelling. In Seattle the justification of a crossing of a neighborhood greenway, or in a school zone, previously required more than 20 adults or 10 children crossing per hour. Other areas required more than 40 pedestrians crossing per hour. Numbers this high tend to indicate crossings where pedestrians already feel comfortable, or locations generating scores of pedestrian trips where pedestrians have no alternative but to cross in unmarked crossings, or to cross illegally. The new guidelines will allow for marked crossings to be installed where pedestrian activity is anticipated.

This kind of preemptive allowance parallels the ways agencies treat driving. Developments that are expected to generate a significant increase in auto trips trigger certain mitigations in advance rather than after-the-fact. In essence, the new Seattle guidance says driving and active modes should be treated similarly in terms of how new development accommodates travelers either walking or driving.

The new guidance uses the concept of “pedestrian generators”. Tier one generators include trail or neighborhood greenway crossings and transit stops along Seattle’s Transit-Plus Multimodal Corridor (TPMC). Enhanced crossings in these locations “should be consistently provided” across arterials and near schools, according to the new standards. However, as Ryan Packer points out in the Urbanist, focusing on the TPMC misses a number of highly- used transit stops that are off of this network.

The list of second tier generators includes, for example, transit stops outside of the TPMC network, main park entrances, senior centers, childcare centers, libraries, places of worship, entrances to hospitals, universities, and pedestrian oriented retail stores. These locations “should be considered for proactive installation” of enhanced crossings, but require some justification, such as crash data, planned land uses, pedestrian counts, roadway speeds, lane numbers, and the characterization of populations to be served.

The downsides of installing more crosswalks include the cost of installation and maintenance, and some minor delay for drivers. In comparison to the costs of road construction and repair, however, crossings and sidewalks constitute a small fraction of the budget, and become more worthwhile when the benefits of equity are considered. A built environment designed to accommodate safe, convenient walking becomes an asset to health and the environment, consistent with Seattle’s Comprehensive Plan, and SDOT’s Pedestrian Master Plan.

Seattle’s approach allows agencies to treat the movement of pedestrians in a similar manner to that of drivers, and gets closer to a holistic network approach that considers the mode-agnostic movement of people. We’ll see if it catches on.