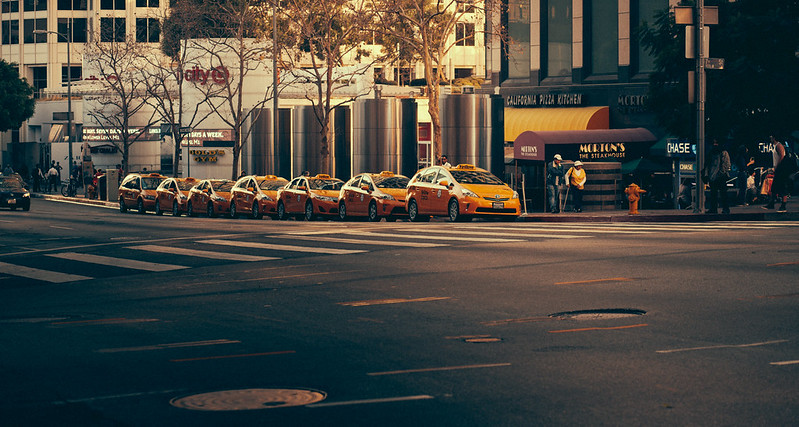 A landscape that was once dominated by taxis and then gave way to mobile ride-hailing companies like Uber and Lyft (aka transportation network companies, or TNCs), appears to be taking on a new hybrid form as some taxi companies take cues from their modern competitors and even figure out how to partner with them.

The growth of TNCs offered undeniable benefits for some. Anyone with a credit card and a smartphone could get low-cost rides at the push of a button in just about any urbanized area across the U.S.  But it also had consequences. Traffic surged, along with the associated environmental impacts, and traditional taxi companies took a hit.

New York’s taxi medallion system collapsed, leaving many drivers in financial ruin, and taxi companies across the country have closed or filed for bankruptcy. That has left many travelers without common protections offered by well-regulated taxis, such as cash payment options, accessible vehicles, and guaranteed service anywhere at any time.

In extreme cases, like in SSTI’s hometown of Madison, Wisconsin, some taxi companies have decided to capitalize on the relaxed regulatory framework offered to TNCs and operate more like private ride-hailing companies—providing service wherever and whenever they choose—while no longer following local taxi regulations. Others have simply learned to adapt to TNC culture by developing their own on-demand mobile platforms or leveraging existing platforms like WAAVE.

Meanwhile, however, the climate has also changed for TNCs. The average cost of an Uber ride has likely doubled since 2018 and the two largest companies have added new surcharges. In Seattle, Uber rides are rebounding slower than transit, with ridership still around one-third of pre-pandemic levels, compared to around 50% for transit and 70% for Uber rides in other metropolitan areas. These changes come partly as the companies strive to remain financially viable, but also as they face increased driver shortages.

Those challenges have prompted what might seem like an unlikely partnership between TNCs and traditional taxi companies in some cities. New agreements in New York and San Francisco would let taxi drivers use the Uber platform—giving taxis access to more riders and Uber access to more drivers. According to the New York Times, however, not everyone likes the move:

“That has some San Francisco taxi drivers concerned that they will be offered cheap rides that earn them only a few dollars. Others worry that surge pricing—when Uber elevates rates at times of high demand—could price current low-income taxi customers out of getting rides.”

A viable path forward looks unclear for ride-hailing services, taxi companies, or some unforeseen hybrid. And questions remain about whether those services will be able to offer the same value, reliability, and protections that travelers are used to. In the meantime, it will be important for policymakers and lawmakers to stay abreast of national trends and the potential local impacts, taking steps where necessary to ensure all members of their communities have fair and sufficient access to mobility options.