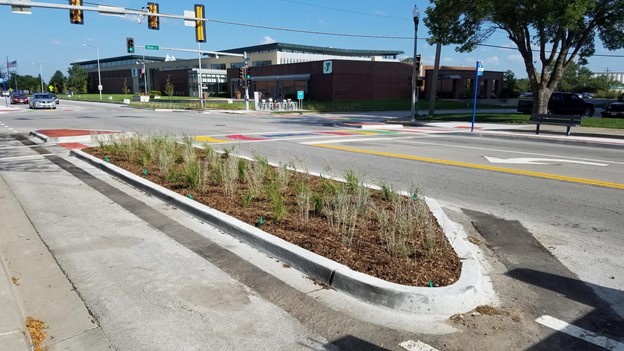 Infrastructure planning processes have long been forced to rely on expensive and time-consuming methods of data gathering or, in some cases, anecdotal evidence and hypothetical arguments from both project supporters and opponents. Fortunately, thanks to the increased availability of location data, cities are beginning to add important quantitative measures to their decision-making process, including the opportunity to analyze the conditions before and after a project is installed.

In North Kansas City, MO, for example, planners have used big data to show the benefits of multimodal infrastructure. The city added traffic calming measures, including a protected bike lane, to Armour Road, a move guided in part by information gathered by Streetlight Data. Planners compared a variety of metrics from before and after the measures were installed to answer three questions: 1) Did the new bike lane lead to cycling making up a larger portion of traffic volume?; 2) Did the traffic calming measures lead to less speeding?; and 3) Did the infrastructure changes improve or at least maintain travel times?

Using anonymized navigation-GPS data and Location-Based Services (LBS), data planners compared the corridor usage in Spring 2019, before the infrastructure improvements were installed, to Spring of 2021, after they were completed. Additionally, the data allowed planners to compare Armour Road to a control road—East 21st St., which runs parallel to Armour Road—to determine if any increased rates of cycling on Armour Road simply pulled cyclists from nearby roads or if total biking increased.

Combining the newly available data with more traditional forms of observation, such as surveys and counters, planners found that the traffic calming measures delivered on the project’s original goals. Specifically, daily bike trips on Armour Road increased from 50 to 114 with East 21st St. also seeing a proportional increase in bike traffic, suggesting that the additional bike trips on Armour Road were mostly new trips, not pulled from other nearby routes. Also, vehicles traveling over 40 MPH dropped from about 5% of all vehicles in the study area to nearly zero, while travel times increased a modest five seconds. Overall, this new strategy for evaluating projects allowed planners to confirm that the city’s investment resulted in increased biking, fewer cars traveling at dangerous speeds, and only a negligible increase in trip times.

Using data to evaluate the impact of infrastructure projects allows cities to better understand what works and what doesn’t, resulting in more efficient use of public funds and safer streets for the community.